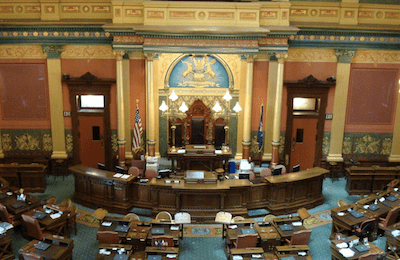 The Michigan House of Representatives passed a bill designating English as the state’s official language of government.

If the bill passes the state Senate, then Michigan will become the 33rd state to declare English as the official language.

The bill – HB 4053 – requires that English be the official language used in all public documents and in all public meetings. It does not prohibit state departments from translating official documents to languages other than English but requires that the original document be filed in English. There are also common-sense exceptions for tourism, business promotion, and the court system.

State Rep. Tom Barrett, the sponsor of the bill, stressed that the bill simply codifies into law what is already being practiced in Michigan and added, “Are we so divided that we can’t get 55 people to acknowledge that English is the fundamental language of this state? Diversity with no shared values drives us deeper into our different corners and silos.”

State Rep. Aaron Miller said, “I think this is a great day. We’re not stepping on toes. We’re not turning people away. We’re simply saying English is our common language.”

State Rep. Gary Glenn stated, “This is a statement of compassion.”

The bill now moves to the state Senate in Michigan, where Republicans hold a 27-11 majority.