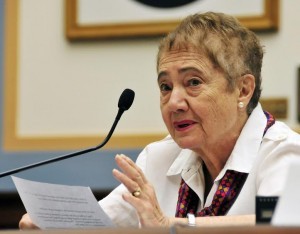 On August 2, 2012, the U.S. House Judiciary Subcommittee on the Constitution held a legislative hearing on making English the official language of the United States.  The hearing focused on H.R. 997, the English Language Unity Act of 2011, introduced by Congressman Steve King of Iowa. This legislation garnered 122 bi-partisan co-sponsors during the 112th Congress.  Full details of the hearing, witness list, written testimony, and an archived video of the full hearing can be found on the Judiciary Committee’s website here.

ProEnglish Chairman Rosalie Pedalino Porter, Ed.D testified in favor of Congress passing H.R. 997 to establish English as the official language of the federal government.  The following is Chairman Porter’s verbal testimony presented before the committee:

Ms. Porter.  Thank you for the opportunity to testify today in favor of H.R. 997, legislation that would make English the official language of the United States.

My name is Rosalie Pedalino Porter, and I am chairman of the board of ProEnglish, a national advocacy organization. When I immigrated to the United States from Italy as a 6-year-old child, no one in my family spoke a word of English. I was fortunate to grow up at a time when Americans felt confident about their national culture and immigrants were encouraged to learn the English language and to assimilate.  The public schools taught me English, opening the door for me to a wonderful education up to the graduate level at the University of Massachusetts.

I am committed to protecting English as our common language because it is so essential to immigrant success. My professional career of 4 decades has been dedicated to improving the education of non-English speaking children in our schools. I have advised school districts and testified in court cases in Arizona, California, Florida, Massachusetts, Texas, and Washington. From 1985 to 1988, I served on the National Advisory Council on Bilingual Education that advised the U.S. Congress on education policy.

The organization that I chair, ProEnglish, was founded in 1993 to preserve English as the common unifying language of our nation by making it the official language at all levels of government–local, state, and Federal.  As you have heard everyone say this morning, the English language is one of the strongest and most durable ties that unite us as Americans. The founders of our Nation recognized this, and this is why President George Washington signed a law passed by Congress in 1795 requiring all existing and future Federal statutes of the United States to be published exclusively in English. 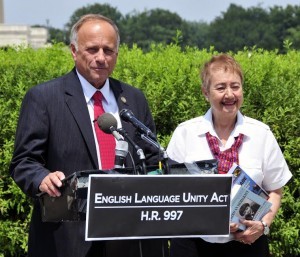 Having one official language of record for government operations and communications makes government more efficient and less costly. It eliminates the demands for taxpayer funded services for documents in any other language, with exceptions under H.R. 997 for instances that serve the public interest, as in protecting public health and safety.  It does not mean “English only.”  Nor does it force anyone to speak English in their personal daily lives or limit the study of foreign languages. Official English means that for the government to act officially and with legal authority, it must communicate in the English language.

Ninety percent of the world’s nations have at least one official language, including 47 countries that have English. Thirty-one of our 50 States have already adopted it as their official language in statewide elections, with voter approval margins as high as 9 to 1. No harmful effect has yet been reported from these laws.

Here are 3 urgent reasons why Congress should act now. First, it is time to end the Federal government’s policy of trying to force all government agencies and Federal funds recipients to provide multilingual services. This policy relies on an incorrect interpretation of civil rights law.

Second, we need to avoid the kind of divisiveness, inefficiency, and waste that we see today in places like the European Union, which is struggling to cope with 23 official languages.

Third, as our country grows more diverse, thanks to our immigration, with 303 languages now present in our population, it is even more important to stress what unites us as Americans – a common language.

Mr. Chairman, I respectfully urge the passage of H.R. 997.  It is essential to the unity and well-being of our country. It will promote the successful integration of immigrants and their children into American life and will save millions of taxpayer dollars. Perhaps those dollars could be used for English teaching classes.  It will reinforce a melting pot ideal that has helped to make our country the most successful country in the world.

Thank you. I will be happy to answer any questions, Mr. Chairman, from you or your colleagues.

Full details of the hearing, witness list, written testimony, and an archived video of the full hearing can be found on the Judiciary Committee’s website here.