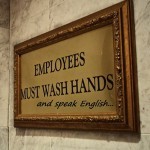 ProEnglish has been at the forefront of efforts to educate employers about their rights and to inform Congress and others about the Equal Employment Opportunity Commission’s (EEOC) renegade efforts. On the other hand, the EEOC presumes that English-in-the-workplace policies are discriminatory, and are therefore illegal under the 1964 Civil Rights Act.

For over twenty years, the federal EEOC has aggressively targeted and punished employers who chose to adopt English-in-the-workplace rules.

The courts have repeatedly affirmed that employers have the right to establish English speaking policies. The EEOC “disagrees” with these rulings, however, and it continues to enforce a bureaucratic policy which the courts have ruled is ultra vires, or “beyond [the EEOC’s] authority.”

The EEOC appears to have implemented a strategy of trying to gain settlements from small businesses which do not have the resources to defend themselves in court. These settlements are often used to create a legal precedent that contradicts earlier federal court rulings.

In the past, ProEnglish has helped RD’s–a family owned drive-through restaurant in rural Arizona–defend itself against EEOC charges. The agency alleged that the restaurant discriminated against employees on the basis of national origin by implementing a policy requiring employees to speak English while at work.  As it turned out, Navajo-speaking bilingual employees had been using the Navajo language to harass and demean fellow employees and customers.

On December 12, 2008, the United States Commission on Civil Rights (USCCR) held a hearing on English Only Policies in the Workplace in Washington, D.C.  The hearing concerned the Equal Employment Opportunity Commission’s (EEOC) enforcement policies that view as presumptive violations of law the requirement by some employers that their employees speak English on the job. You can read the full published report here.

Former ProEnglish Executive Director K.C. McAlpin testified in favor of employers’ right to establish English-on-the-job policies.  The following is the USCCR’s summary of his testimony: 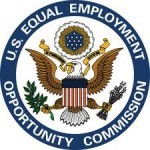 Mr. McAlpin said that unlawfully placing this burden on the employer gives the EEOC the unfettered discretion to challenge any English-only policy.  Citing Garcia v. Spun Steak Company, he argued that the EEOC is acting outside of its statutory authority, and noted that no controlling case supports the EEOC’s definition of national origin.  He contended that in 35 years of cases, no court had ever adopted the EEOC’s interpretation, while in over 20 cases courts had specifically rejected the EEOC’s position.

Mr. McAlpin related the case of a fellow panelist, Mr. Kidman, which involved an English-only policy to stop sexual and verbal harrassment at RD’s Drive-In.  He characterized the EEOC as persecuting the Kidmans and waging a media campaign against them, using its superior resource to intimidate them and force a settlement.  He condemned the EEOC’s tactics as unlawful, defiant of the courts, and in violation of employers’ and employees’ rights.  He contended that “only lawyers blinded by ideology, or obsessed with an agenda could have looked at the facts and concluded that the Kidmans were discriminating against their Navajo employees.”

He said that the EEOC is aware that, however unfounded its legal case against a defendant, its vastly superior funding will cause most small business defendants to settle rather than fight the allegations in a protracted legal proceeding.  He argued that employers are caught in a “Catch 22” situation–if they do address racial and sexual harrassment that takes place in languages other than English, they can be sued under Title VII for maintaining a hostile work environment; if they create an English-on-the-job policy, they risk public attack and prosecution by the EEOC.  In conclusion, Mr. McAlpin urged the commissioners to condemn what he termed “the EEOC’s allegedly unlawful conduct.”

If you are an employer who would like to establish an English language workplace policy or if you are being threatened by the EEOC, contact ProEnglish at 202-507-6283  to find out how we can help you assert your rights.