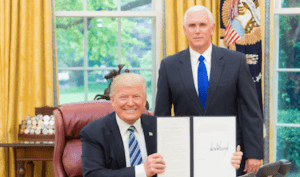 “ProEnglish, the nation’s leading advocate of preserving English as our common tongue and making it the official language of the United States, is urging President Donald Trump to repeal Executive Order 13166,” says Executive Director Stephen Guschov. “This executive order, issued during the last days of the Clinton administration, discourages assimilation of legal immigrants by requiring that the federal government provide expensive translation services in any foreign language.”

A study by the Government Accountability Office during the first term of the Bush administration estimated these additional translation costs amounted to over $2 billion a year for the taxpayer. This GAO study is a dozen years old now and the costs have obviously skyrocketed. Just as disturbing, though, is that this executive order undermines American unity by promoting divisive multilingualism,” Guschov notes.

ProEnglish to Trump: Repeal Executive Order 13166 “E.O. 13166 heavily impacts the area of health care,” Guschov says. “Requiring extra translation services for the over 300 languages spoken in this country only increases the cost of health care on all Americans while promoting linguistic divisions. Before this executive order, family members, friends or bilingual healthcare providers provided translation services for those with limited English skills.”

“During the 2016 presidential campaign then-candidate Trump told ProEnglish that he supports the concept of English as the official language of government. In fact, Vice President Mike Pence while serving in Congress was a co-sponsor of official English-in-government legislation. It only makes sense that the president adds E.O. 13166 to his list of unwise or unconstitutional presidential fiats that should be relegated to the trash can,” Guschov concludes. “After all, a requirement of U.S. citizenship is that one should be proficient in the English language.”