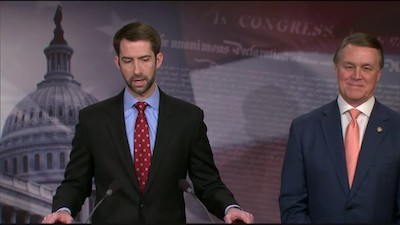 WASHINGTON, D.C.— “ProEnglish, the nation’s leading advocate of preserving English as our common tongue, supports the English provision of the just-introduced RAISE Act by U.S. Sens. David Perdue, R-Ga., and Tom Cotton, R-Okla. Aside from establishing a point-based system that would help select skilled immigrants who have the most to offer this nation, while reducing the immigrant flow to traditional levels, applicants earn points on their ability to be proficient in English.

“The English component is especially necessary,” says ProEnglish Executive Director Stephen Guschov. “The Clinton-era Executive Order 13166, which has never been repealed, requires all federal funds recipients including hospitals, doctor’s offices and school districts to provide interpreters or translations for non-English speaking persons. And they must pay for it themselves. If they don’t, they face civil rights violations, fines and even jail time.”

“Over a decade ago the General Accounting Office estimated the cost of E.O. 13166 was in the billions of dollars annually. So it is only common sense that if we’re going to be forced to bear the cost of immigrants who can’t speak English, we should require them to speak it before they get a visa and can come into our country,” Guschov says.

“E.O. 13166 heavily impacts the area of health care,” Guschov adds. “Requiring extra translation services for the over 300 languages spoken in this country only increases the cost of health care on all Americans while promoting linguistic divisions.”

“It only makes sense that President Donald Trump add E.O. 13166 to his list of unwise or unconstitutional presidential fiats that should be relegated to the trash can,” Guschov concludes. “After all, a requirement for a green card or U.S. citizenship is that one should be proficient in the English language.”