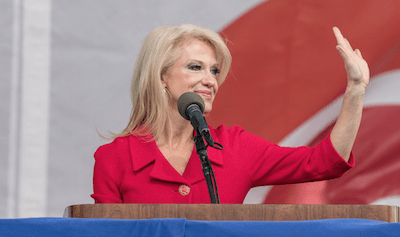 Conway currently serves as Counselor to President Donald Trump. She played a very important role in President Trump’s campaign and election in 2016, and she is regularly seen making the rounds of media interviews on behalf of the Trump Administration.

During the conversation, Guschov was able to engage Conway about ProEnglish’s advocacy of the English Language Unity Act, the RAISE Act, and President Trump’s hopefully forthcoming repeal of President Clinton’s Executive Order 13166.

ProEnglish very much appreciates Kellyanne Conway taking the time to converse about official English legislation. As President Trump himself said during a campaign debate in 2015, “We have a country where to assimilate, you have to speak English.”