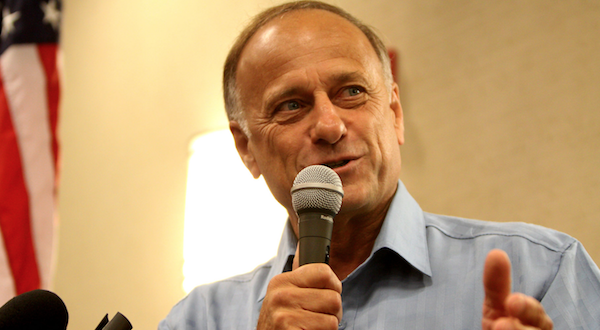 ProEnglish is pleased to announce that Rep. Steve King recently made floor remarks in the United States House of Representatives on behalf of HR 997, also known as The English Language Unity Act of 2017.

Rep. King authored HR 997, and the bill seeks to designate English as the nation’s official language of government operations and also seeks to establish uniform language requirements for the citizen naturalization process.

HR 997 is adding new bill co-sponsors every week in the House.

In his floor remarks, Rep. King stated, “A common language is the most powerful unifying force anywhere in the world throughout all of history….” He added, “We have a common language that is English. We need to make our official language English, and, of course, I have introduced legislation, Mr. Speaker, to do that. It is HR 997; it has been HR 997 since I came to this Congress, and one day we are going to see a President sign that bill, and it might very well be this President we have today, President Trump. He has spoken in favor of official English, and I certainly agree with him on this.”

Rep. King further observed, “America needs to establish English as the official language, because it is our common language. We are extraordinarily blessed to have English as our common language, and we can eliminate, then, the billions of dollars that we spend as we hire interpreters, and we slow down our process. And if we establish English as the official language, we will accelerate the learning of our language all across this land.”

Read the entirety of Rep. King’s substantive floor remarks at this link: