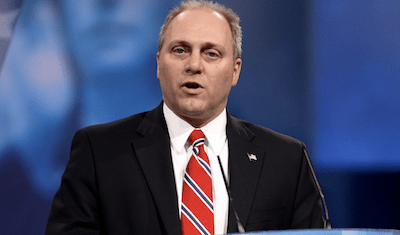 Guschov, Carter, and Rep. Scalise discussed the progress that has been made in recruiting new co-sponsors in the United States House of Representatives for HR 997 – The English Language Unity Act of 2017 – and also discussed the possibility of making additional floor remarks in the House in support of the passage of HR 997.

It was a very fruitful meeting.

The Board of Directors of ProEnglish awarded Rep. Scalise with the Theodore Roosevelt American Unity Award for the 114th Congress in order to recognize Rep. Scalise’s congressional leadership in working to preserve and protect the nation’s unity through our common English language.

ProEnglish also was delighted to see Rep. Scalise in such good spirits after the horrific events of June 14, 2017, in Alexandria, Virginia, and ProEnglish wishes Rep. Scalise all the best as he continues to recover from his injuries.